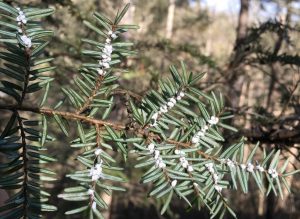 HWA on a hemlock branch. White “puff balls” at the base of the needle are a tell tale sign.

The hemlock woolly adelgid (HWA), Adelges tsugae, was first described in western North America in 1924 and first reported in the eastern United States in 1951 near Richmond, VA.  This small aphid-like bug attaches to hemlock trees at the base of the needle towards the tips of the branches and feeds on the starch reserves in the branches. The nearly invisible HWA is primarily to blame for the severe decline of eastern and Carolina hemlock currently taking place in the forests of eastern North America. 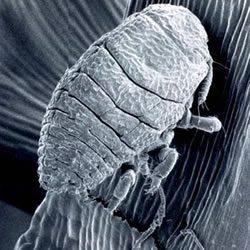 Research scientists using molecular genetics have recently determined that several distinct populations of HWA occur in Asia and western North America, and we now know that HWA populations found in eastern North America originated from southern Japan. These exotic adelgids feed only on hemlock and depend on the tree to complete their life cycle. In eastern North America, HWA reproduces asexually. Every individual is essentially genetically identical, female and capable of reproducing. They have two generations each year, and with abundant hemlock hosts in eastern forests, HWA has reproduced rapidly. Incapable of moving far on their own (in North America, HWA have usable legs for only a small portion of their lives), these little bugs disperse via wind, birds, animals, people and traffic. HWA was first detected in Shenandoah National Park in Virginia in the 1980s; by the early 2000s, its reach was significant and devastation was widespread.

In their native range, HWA causes little damage to the hemlock trees they feed on, and possible tree resistance has coevolved with this insect pest.  In the absence of these natural control elements in eastern North America, this introduced insect pest attacks both eastern (Canadian) and Carolina hemlock which are often damaged and killed within a few years of becoming infested. HWA is now established in approximately half of the range of the eastern hemlock and the entire range of Carolina hemlock.  It has been found from northeastern Georgia up the east coast into Canada and as far west as eastern Kentucky, Tennessee, and now Michigan.

HWA was first reported in North Carolina in 1995 in three counties adjacent to Virginia. In 2002, the pest was discovered in the Great Smoky Mountains National Park–home to 200,000 acres of old growth forest, 35,000 of which have a significant hemlock component. Coinciding with a severe drought, mortality was rapid and near complete, with the world’s largest known eastern hemlock, the “Caldwell Giant,” dead from HWA before it was discovered. HWA has progressed more rapidly and been more destructive in the southern Appalachians than originally expected, likely due to a combination of factors that includes drought, abundant hemlock populations, exceptionally large trees, and milder temperatures. In other parts of the eastern hemlock’s range, colder winters and hotter summers have slowed the advancement of the pest. 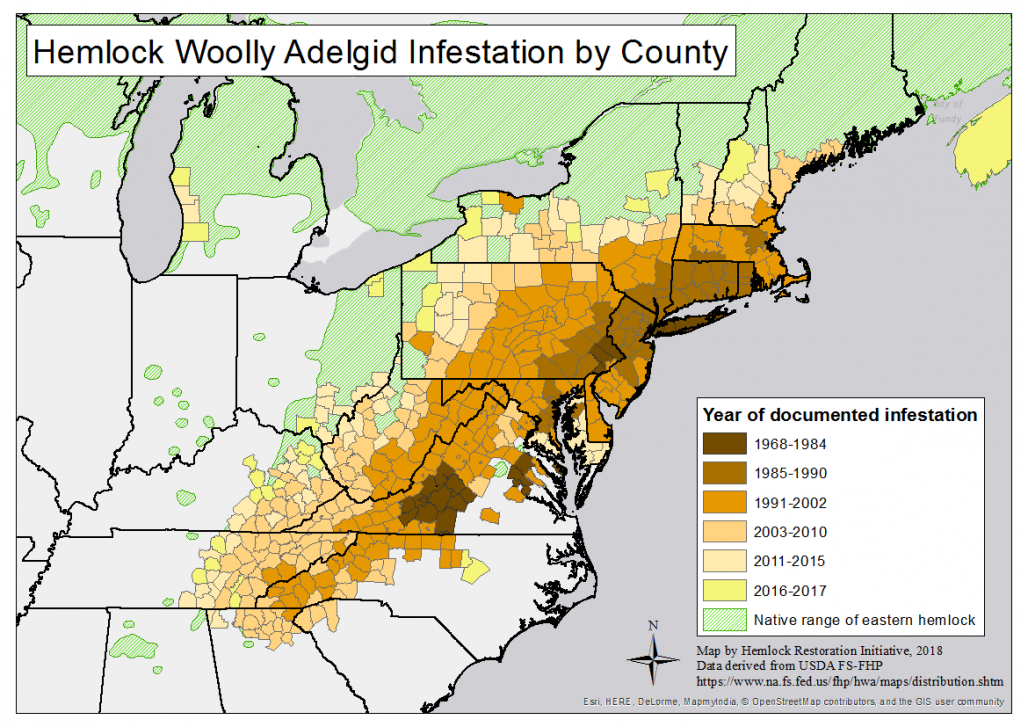 The hemlock woolly adelgid kills trees slowly, affixing itself to the base of the hemlock needle where it feeds on the tree’s starch reserves. HWA feeding interferes with the tree’s ability to take up water and nutrients, producing a drought like response that some researchers have likened to an allergic reaction. As a result, the hemlock’s needles take on a grey and dusty appearance and begin to drop. Increasingly unable to photosynthesize as it loses its needles, the tree slowly dies from the bottom up. Trees can succumb to the pest in as little as four years, but in some cases this takes much longer. Sadly, the largest trees, which require the movement of more water and nutrients to their crowns, appear to be the most vulnerable. 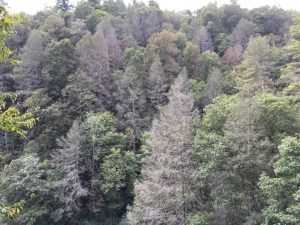 In Asia and the US Pacific Northwest, HWA native to those areas does not have the same devastating impact on hemlock populations. Even eastern hemlocks re-located to these areas do not succumb to adelgid pressure as they do in their native range on the east coast. It is believed that this is due to the co-evolution of western and Asian hemlocks with HWA and native predator insects. It is likely that the reason that these trees remain healthy, even when infested with HWA, is that a delicate predator/prey relationship between HWA and other native insects has been established over thousands of years of evolutionary history. It is also possible that in addition to the presence of native adelgid predators, western and Asian hemlock species have some form of innate resistance that allows them to tolerate the pest and remain healthy even when infested. While on the east coast, HWA has no specialized, native predators, and it is clear that eastern and Carolina hemlock species have no widespread natural resistance to HWA. Specialized HWA predators and possible genetic resistance – present in the native range of other hemlock species- are hopeful signs for researchers and natural resource managers working diligently to slow and stop the destruction that HWA is causing in the east. Integrated pest management (IPM) of HWA in eastern North America includes the use of pesticides on a tree-by-tree basis, the introduction of biocontrol agents from HWA’s native range both in Asia and western North America, the selection and breeding for genetic resistance, conservation of genes from across the ranges of both eastern and Carolina hemlocks, and silvicultural methods to reduce stress on infested trees. See the Solutions section of our website to learn more about each of these strategies. Landowners and land managers can find helpful information under our Resources section.

There are also other factors that exacerbate the HWA problem for hemlocks. These include other pests and pathogens and a changing climate, bringing with it increased incidences of drought and rising temperatures, which contribute to the stress of trees already weakened by HWA and increase the peril for both eastern and Carolina hemlocks.