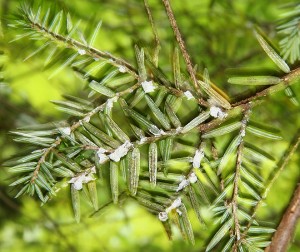 The hemlock woolly adelgid (HWA), Adelges tsugae, was first described in western North America in 1924 and first reported in the eastern United States in 1951 near Richmond, VA.  This small aphid-like bug attaches to hemlock trees at the base of the needle towards the tips of the branches and feeds on the starch reserves in the branches.

In their native range, HWA causes little damage to the hemlock trees they feed on as natural enemies and possible tree resistance has evolved with this insect pest.  In the absence of these natural control elements in eastern North America, this introduced insect pest attacks both eastern (Canadian) and Carolina hemlock which are often damaged and killed within a few years of becoming infested. HWA is now established in approximately half of the range of the eastern hemlock and the entire range of Carolina hemlock.  It has been found from northeastern Georgia up the east coast into Canada and as far west as eastern Kentucky and Tennessee.

See our Solutions section to find out about what is being done by the Hemlock Restoration Intiaitive and others to combat HWA.