Biological controls include a number of predatory insects specially adapted to feed on hemlock woolly adelgid (HWA). Most are predator beetles collected from the wild in the US Pacific Northwest and Japan (where HWA is native) and reared in labs for release on the East Coast. It is important to note that several beetle species have been evaluated and tested as biological controls by the USDA and others, and they do not all perform the same.  They all have their pros and cons, and their performance is still being assessed.  None are likely to act as a stand-alone silver bullet; though, they are considered to be an essential component of long-term HWA control. The careful and intentional introduction of multiple species of HWA predators may allow for the formation of an ecological guild of predators that increases the overall effectiveness of the biological control effort.

Since its inception in 2014, the Hemlock Restoration Initiative has primarily worked with the Laricobius genus of HWA predator beetles. Therefore, the information below will largely focus on Laricobius beetles. For a more thorough overview of the multiple species that have been evaluated for use as HWA biological control agents, visit this University of Massachusetts Amherst webpage. This publication from the US Forest Service outlines the history of biological control of HWA in the eastern US. Learn how to monitor for Laricobius beetles on your own trees here.

Laricobius is a genus of beetles in the family Derodontidae, the tooth-necked fungus beetles.  There are three species native to North America: L. nigrinus and L. laticollis are native to western North America, and L. rubidus is native to eastern North America.  All members of the genus Laricobius are only known to prey on adelgid.  The other three genera in this family feed on fungi or the by-products of fungal metabolism.  This family is not commonly encountered in the field, possibly due to its small size (< 3 mm long). The three Laricobius you might encounter when monitoring on hemlock in western North Carolina are the two introduced biocontrol agents, L. nigrinus and L. osakensis, and our native L. rubidus.  L. rubidus primarily feeds on pine bark adelgid, but may be found on hemlock, especially in forests where hemlock and pine grow together. The image below show the comparisons in size and color between the three species. Note the color difference between male and female L. osakensis. 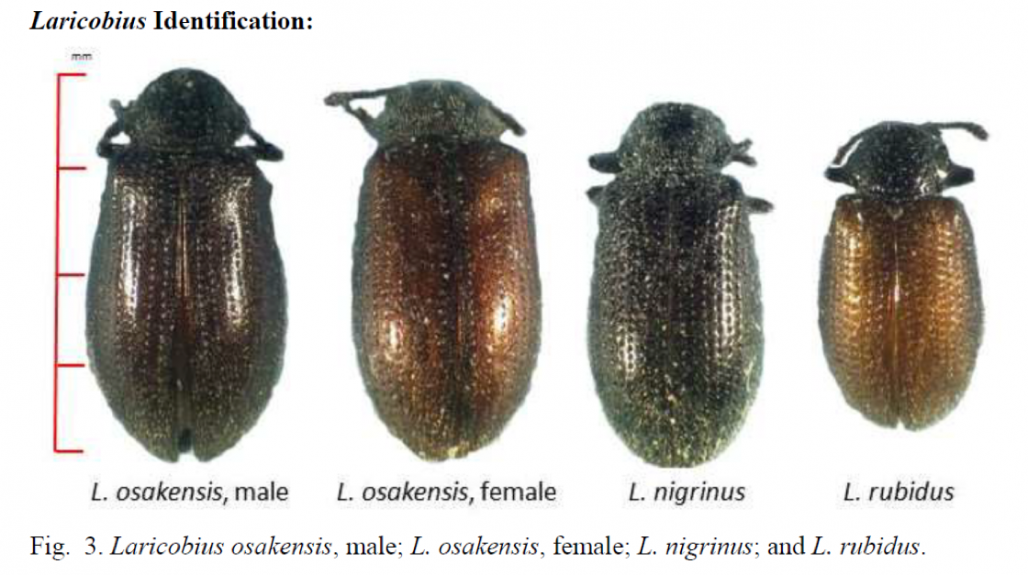 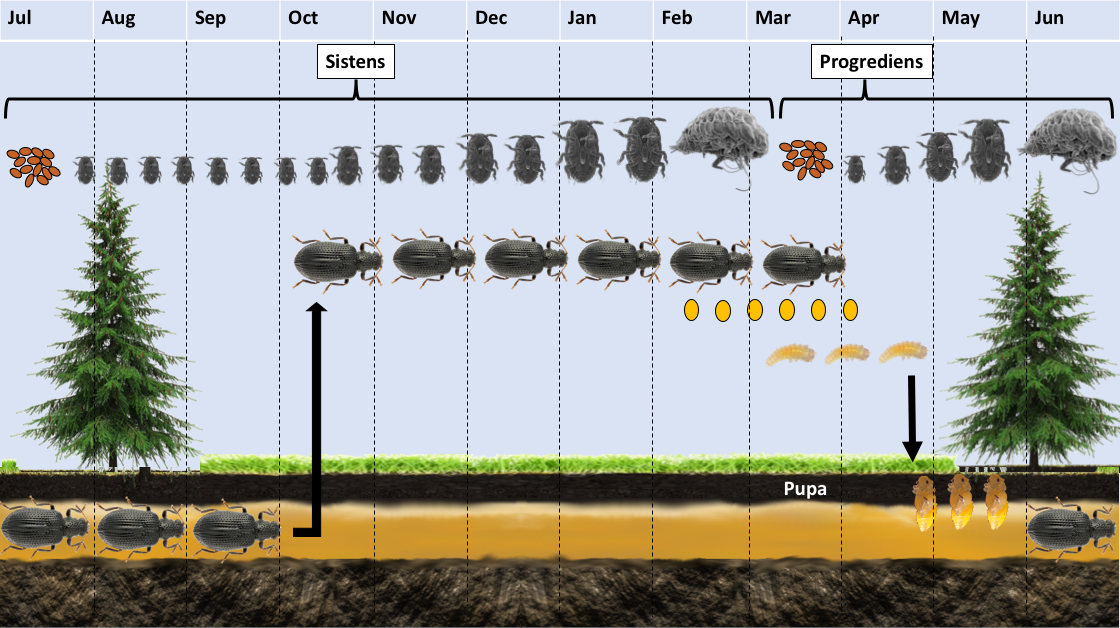 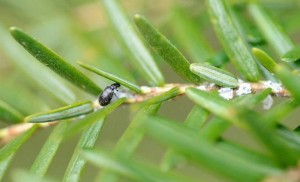 The species that has so far shown the most promise as a biological control agent is Laricobius nigrinus, a predator beetle native to the Pacific Northwest.  It has been found in close association with HWA on western hemlock, Tsuga heterophylla, in the Pacific Northwest, where HWA is not considered a forest pest.  L. nigrinus adults are active from October to March and larvae can be found feeding on HWA in March and April; both adults and larvae will consume all stages of HWA: eggs, nymphs, and adults.

After exhaustive evaluation in quarantine labs, L. nigrinus was cleared by the USDA for use as an HWA biocontrol in the eastern United States in 2000 and has been released in NC since 2003.  Over 400,000 L. nigrinus beetles have been released at more than 1,000 unique sites from Georgia to Maine.  Additionally, a potentially more cold-hardy strain of L. nigrinus from Idaho has been released in northeastern states where low winter temperatures may challenge the pacific strain.

A relative of L. nigrinus that comes from southern Japan is Laricobius osakensis.  A larger and hopefully hungrier cousin, L. osakensis started being released on the east coast in 2012.

“Laricobius osakensis is of particular interest because it is endemic to the same region of Japan as the adelgid and coevolved with the pest. [The January 2016] releases near Asheville and Black Mountain in North Carolina, and along the South Saluda River in South Carolina, were the first releases of L. osakensis in these states.” –From “First Release in the Carolinas of New Hemlock Woolly Adelgid Predator” by Bryan Mudder, SRS Forestry Technician 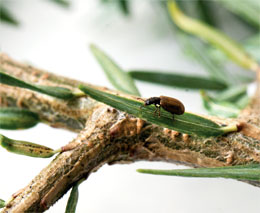 Both L. nigrinus and L. osakensis are being regularly recovered near release areas, and sometimes miles from the nearest release site, which tells us they are spreading on their own.  Because Laricobius only have a one-year life cycle, we also know they are reproducing. Research is currently underway to assess the impact Laricobius is having on hemlock health.  It is likely, however, that a Laricobius alone will not be enough to ensure the long-term health of hemlock forests.  That is why researchers are continuing to look into new HWA biocontrol agents. 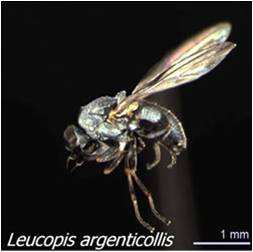 A new promising HWA predator is the silver fly (genus Leucopis).  Along with Laricobius, Leucopis were one of the most abundant HWA predators found during surveys on hemlock in western North America.  They are expected to feed on HWA during late spring and summer months when Laricobius beetles are pupating underground, and therefore not feeding on HWA. Two species of Leucopis, L. argenticollis and L. piniperda, are being looked at as potential biocontrol agents for HWA in the eastern US. 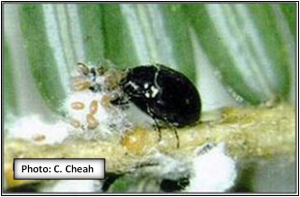 Another HWA predator that has been released up and down the East Coast is the lady beetle Sasajiscymnus tsugae.  S. tsugae was the first approved HWA predator to be successfully reared in the lab in mass numbers and released across the eastern US, with the first release occurring in Connecticut in 1995.  However, it has been difficult to quantify the establishment and impact of this species after releases in the wild.  Most institutions that were working on rearing and releasing S. tsugae have discontinued this work to focus their efforts on other HWA predators.