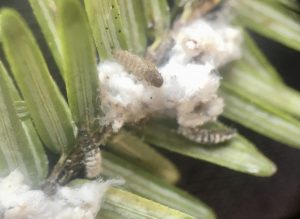 As the adult Laricobius beetles become harder to find with the season advancing towards summer, HRI’s beetle monitoring teams are finding more and more Laricobius larvae. The larvae of these beneficial predator beetles have hatched out of their eggs laid in the wool of HWA and have begun to feed.

Though there are fewer and fewer Laricobius beetles on hemlock branches, there is an increasing number of another beneficial insect – ladybugs! Ladybugs, also known as lady beetles or ladybird beetles, are much bigger and easier to spot than our little Lari beetles as they crawl among the HWA, but how much are they helping the hemlocks? 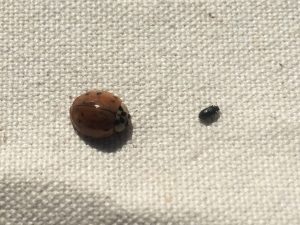 Unfortunately, not as much as we’d hope. Ladybugs do eat the hemlock woolly adelgid, but there are two main reasons why they don’t have any impact on controlling the HWA population.

Ladybugs have a big appetite, but they are generalist predators. As generalists, they eat many different insects wherever they can find them. Often this will include HWA, but it will only be a side dish on the menu of other insects that ladybugs will eat. Our Laricobius beetles specialize on HWA. Although they aren’t quite as big as ladybugs and don’t eat as much food, little Lari is eating HWA for breakfast, lunch, and dinner every day. They also lay their eggs in the HWA wool, so their larvae are eating exclusively HWA as well! This means that despite their smaller size, Laricobius beetles are eating much more HWA than ladybugs and have a much larger impact on the HWA population.

2. Ladybugs hibernate during the winter. 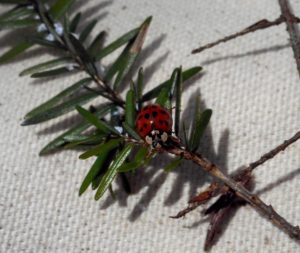 Around April, we see ladybugs come out of overwintering to start feeding. Unfortunately, this means that ladybugs have missed some of the prime time to feed on the hemlock woolly adelgid! HWA is active in the winter when the ladybugs are dormant. HWA may be good snack for older lady bugs in the spring, but in the summer HWA goes dormant when ladybugs are pupating into adults. Once HWA breaks its dormancy in the late fall, ladybugs are already starting to hibernate again. All in all, the life cycles of the hemlock woolly adelgid and ladybugs just don’t line up. 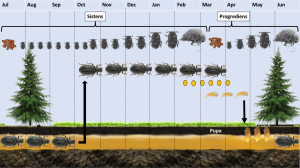 The Laricobius beetle is winter active, just like the hemlock woolly adelgid. When HWA begins feeding in the fall, little Lari emerges from the ground to eat the adult adelgid all season long. In the winter, the adult beetles will lay their eggs in the HWA eggs to provide a food source for larvae as they hatch out. The larvae will feed on adelgid eggs, crawlers, and adults during the spring. The beetle larvae then drop to the soil in the summer to pupate and feed until the weather cools off again in the fall.

While Laricobius doesn’t feed on the hemlock woolly adelgid year round, it does match the adelgid life cycle much better than ladybugs do. Researchers are working to introduce other specialist biological controls to feed on HWA at key times of the year when Laricobius is pupating. During the early summer, a generation of HWA eggs are laid that are untouched by Laricobius. A summer active biological control would complement Lari’s life cycle and HWA would be targeted by predators year round. The goal is to have a suite of specialist biological control predators that will feed on HWA and keep it suppressed to levels that hemlocks can tolerate.