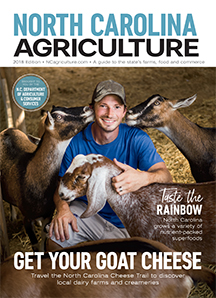 The plight of the hemlock in North Carolina and the state’s efforts to restore these important trees were featured in Joanie Stiers’ article “Rescue Mission: Efforts Re-energize to Protect the Historic Hemlock” which appeared in the 2018 issue of the magazine North Carolina Agriculture. Stiers writes of the birth of HRI, “In 2014, the North Carolina Department of Agriculture and Consumer Services renewed attention to the issue with its commitment of $100,000 to form the Hemlock Restoration Initiative, based at nonprofit WNC Communities. The funds prompted public and private collaborations to save the hemlock, and in 2015, the department granted an additional $250,000 over three years to continue the effort to curb the massive hemlock mortality.”

Stires touched upon many aspects of addressing the hemlock problem in the article. Hemlock Restoration Initiative Coordinator, Margot Wallston states in the piece, “The main message I want to get out to the public is that it is now cheaper and easier to keep your trees chemically protected.” The article also highlights the important role hemlocks play in the ecosystem, especially for water quality. About the collaborative effort taking place in North Carolina to restore hemlock health, Bill Yarborough, special assistant to Agriculture Commissioner Steve Troxler, notes, “The hemlock effort is a great opportunity to showcase what people can do when they work together. There are researchers, volunteers, nonprofits, environmental groups, government agencies, municipalities, county government and philanthropists working on this project to try to make a difference.”

You can read the online article here and browse the full electronic edition of the magazine here.